Introducing Conversion Tracking: To Know Which Half of Your Marketing is "Wasted"

“Half the money I spend on advertising is wasted; the trouble is, I don’t know which half.”- John Wanamaker (wiki).

Although the intrinsic perception among businesses is that if you are doing marketing then it’s certainly going to help your revenue, the reality is otherwise. Your marketing can work both ways. It can match your expectation and positively impact your KPIs. But on the flipside, it can also hurt your conversion and take your KPIs downstream.

So far it was difficult for you to identify the campaigns that were acting as the latter kind on the WebEngage dashboard, the ones wherein you were uselessly investing your effort and money. But that would be the case no more because now we have released “Conversion Tracking“.

With WebEngage’s Conversion Tracking you would now be able to quantify the true impact a campaign is making on your business, both positively and negatively. 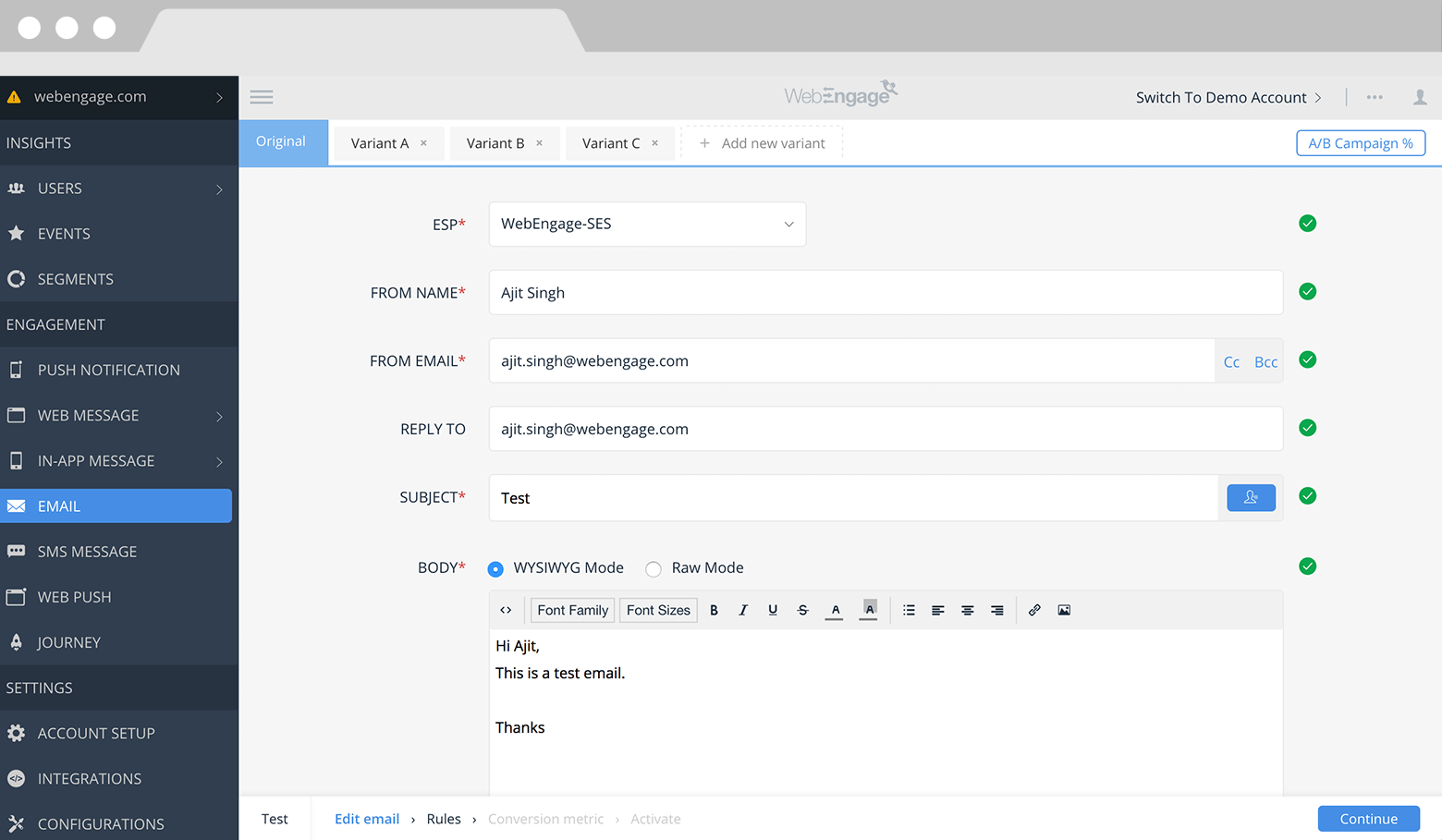 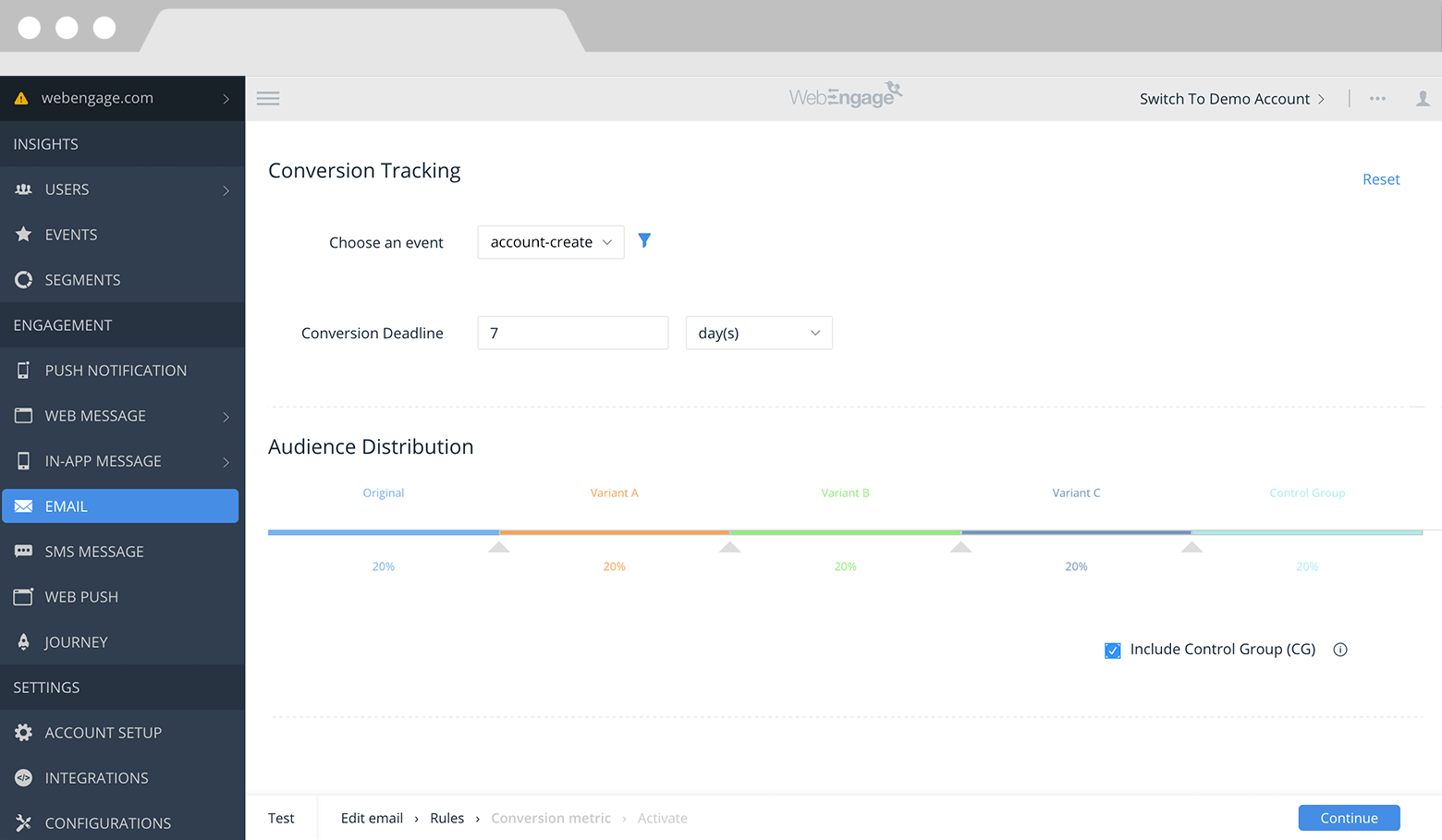 ‘Event’ is the particular action that you want to track on your website or app, like cart_abandonment (read more about events here). In the above step, it is being used as a condition for goal. So if the campaign is able to influence user into performing the action (which is to trigger account_create event) then conversion against the campaign is going to be recorded.

Now, what is a Control Group?

‘Control group’ is the special set of users who, despite being part of the segment, are not treated with the campaign but, and it’s very important, their conversion is tracked. It is basically a neutral group which is created only to gauge the metrics of the users who did not receive any message. Why we do that? Let’s see.

For instance, in this case, we have set the CG as 20% and event as account_create. So if my stats, by the time conversion deadline ends, show that CG users created more account than the users who received my message, then my whole campaign idea was a farce. Likewise, if the activity group wins then I would know what variant of my messaging achieves the most success.

Once you are done setting up the campaign this is how the stats would look like:

In this case, the control group conversion is 20%- 5% lesser than the campaign’s conversion, implying that our campaign has worked.

Now that we are through setting up conversion tracking the question arises how would attribute conversion if there are multiple campaigns triggering the same event.

Suppose you are creating 3 different email campaigns for different segments to trigger a common event, say cart_checkout. Now let’s say user engages with all the three messages and gets converted. In that case, to which campaign would the conversion be attributed?

What is ‘deepest then latest’?

WebEngage system records and compares the following three actions of the user along with their timestamp to attribute conversion.

The actions have precedence in the following order:

So if campaign A, B, C are triggering the same event as goal then the system is going to credit conversion to the one which got ‘clicked’ among all of them. If none get clicked then it is going to credit the one which got ‘viewed’ and likewise it would drill down to ‘sent’. Basically, the preference would for the campaign receiving the relatively highest priority action within the conversion deadline(Deepest of “Deepest then Latest”)

But what happens if both campaign A and B get clicked and conversion happens. As in, how do you attribute conversion if the combination of campaigns receives the same action?

In such case, the system would check the recency(Latest of “Deepest then Latest”)

For instance, if both campaign A and B get clicked, then the credit would be given to the one which was clicked most recently from when the event was triggered (conversion happened).

First precedence to the action and then to the recency- Deepest then Latest.

Case 2- When you create multiple campaigns across multiple channels to achieve a common goal. 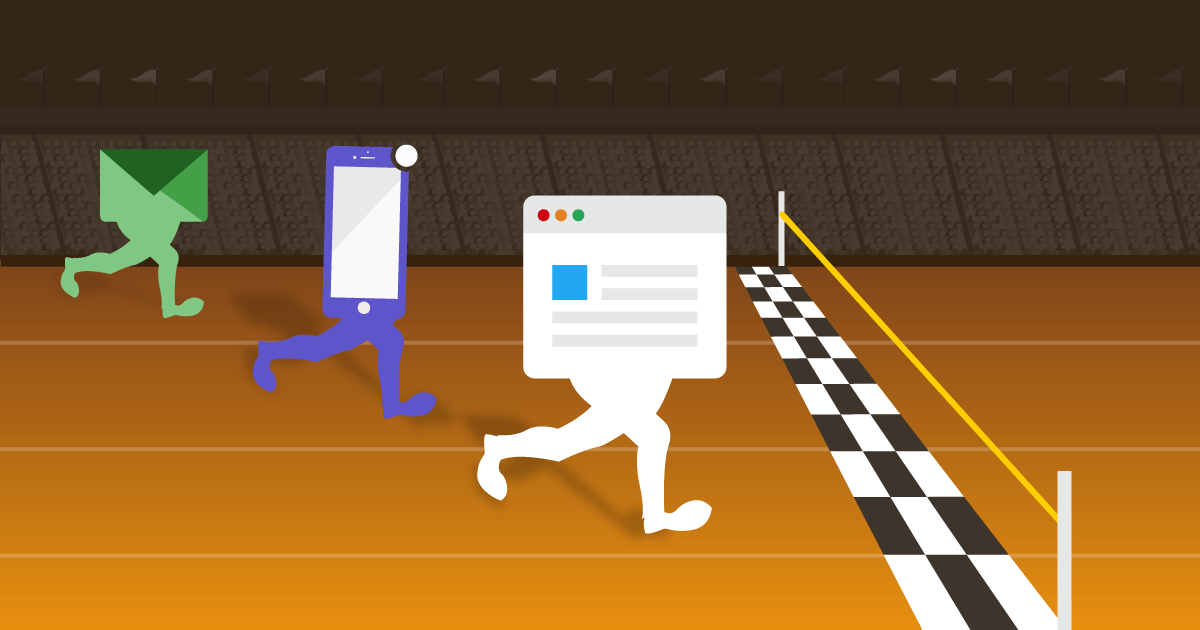 Suppose there are campaigns across multiple channels (push, email, web etc.) which are linked to the same event. Then, how do you attribute?

The answer is- same as above.

The system basically has no preference for any channel and it scores each of them equally from the conversion perspective. So in case multiple campaigns across multiple channels are trying to achieve the same goal, the system, regardless of the channel, would attribute conversion the same way like it would do for multiple variants or multiple same channel campaigns.

The same principle of “deepest then latest: would apply here as well just as it did in the previous case.

That’s about it people. Please try these features out and share your feedback either in the comment or hello@webengage.com.

Liked our article? Give us your feedback by rating it.
Total Rating : 3 , Average Rating : 5
Related Articles

Did you know online buyers are more likely to be impulsive? And apart from internal psychological fa... 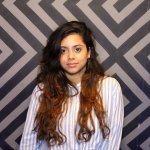 In-app notifications are short and informative messages users receive when they open an app. They he...