Picture yourself filling a survey that poses ambiguous questions or has words you don’t know the meaning of, or doesn’t have the option you would like to select. A simple task becomes cumbersome, even if you go through this ordeal once, you wouldn’t wish to do it again. Right?

Like most tasks that seem to be simple until you begin doing them; initially writing survey questionnaires also comes across as easy.

Moreover, while writing survey questionnaires we often overlook very basic aspects. It stems from the fact that we fail to look from readers eyes but limit ourselves to our perspective.

It is important to ask right questions and also to frame them in an appropriate manner. If you don’t ask proper questions, you won’t get proper responses, thus undermining the complete exercise of surveying.

See how Modrykonik, a social network for mothers, achieved it.

Below is a list of simple points often overlooked while designing surveys: 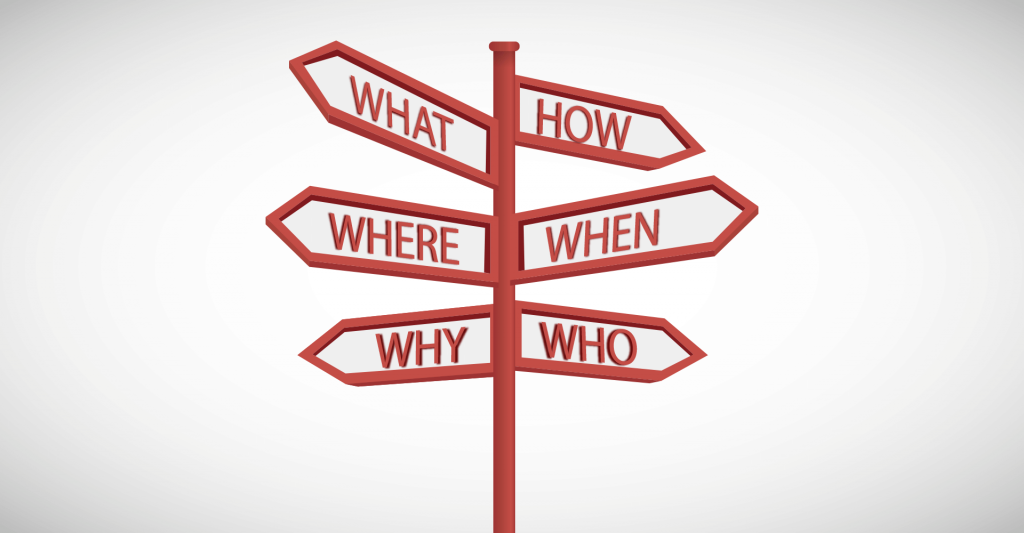 It is essential to pose questions in appropriate format depending upon the type of responses you seek. You can either ask an open-ended question or closed-ended question.

A closed-ended question is the one with given options, to select one or more. Although, in a variety of cases this limits the freedom of responses, it also allows for easy data analysis. Choosing between a set of options doesn’t involve effort, given that options are clearly differentiable and unambiguous.

You could also choose to write questions that provide options to select along with an option to put in responses. A hybrid of open-ended and closed-ended questions. Like the one shown below: 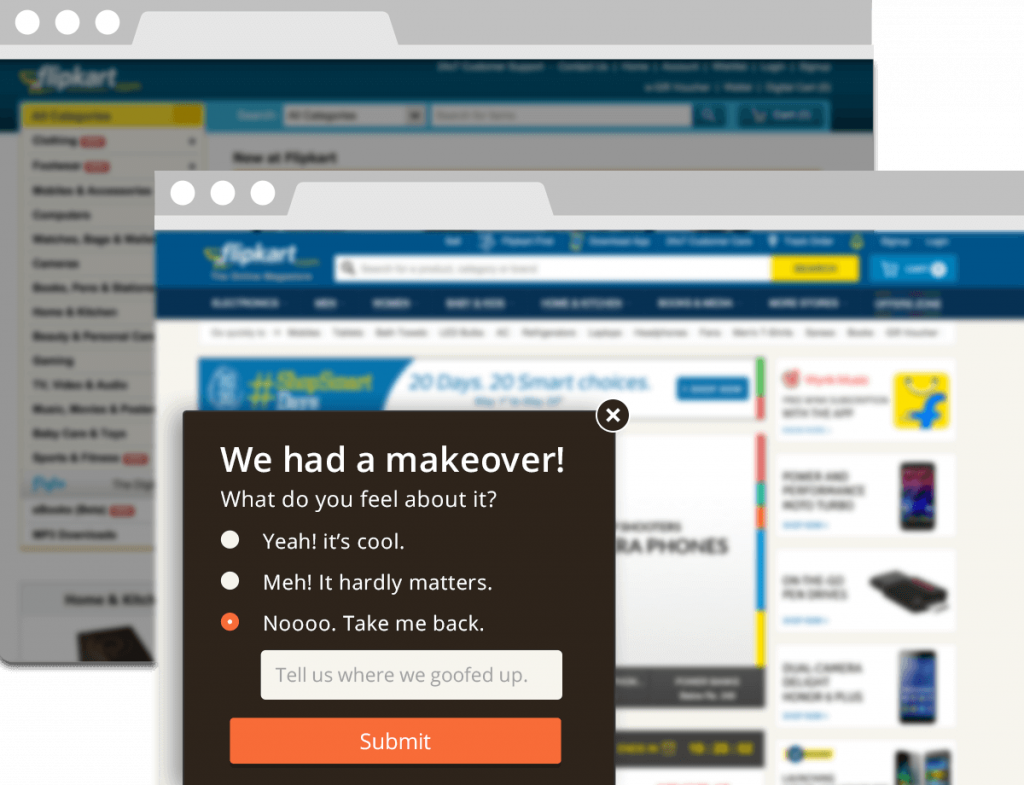 Talking about choosing the right type of question one thing to avoid is a double-barreled question (a question that touches more than one issue yet provides for only one answer) like this one:

A person could be happy with the restaurant’s service and not happy with rates, or vice versa. Better way is to ask two questions instead of just one.

Take a look at the loaded question (a question with unjustified assumption) below and the correct way to ask it.

The logical fallacy in asking a loaded question like the one above is that the person who has never consumed alcohol does not have a choice.

No context equals no text. Text without context is rendered pointless. Many a times it is necessary to set a context to survey.

For instance, letting participants know what’s the survey about, inform them of anything in particular they should keep in mind before responding. It is good to let respondents know what you expect from them.

The first few lines introducing a survey are known as Preamble. In the preamble, you can set the context of the survey.

Stating something like: “think of all the products you shopped online during last three months and answer the following questions.”


Through these few lines, you have managed to explain that the survey is about a participant’s recent online shopping preferences. Informed respondents of how far back in time can they think to answer questions. You have set a context to questions that follow the ‘preamble’. Easing the task of filling survey responses for respondents.

3. Use your audience’s language:

Of course, I am not hinting at the obvious and not suggesting that you pose questions in Mandarin if your respondents are proficient in Mandarin. That’s common sense.

I am here pointing to the gulf between what we take for granted that our audience understands and what they actually understand. The best practice is to avoid getting into this zone and make use of phrases, words that get easily understood. 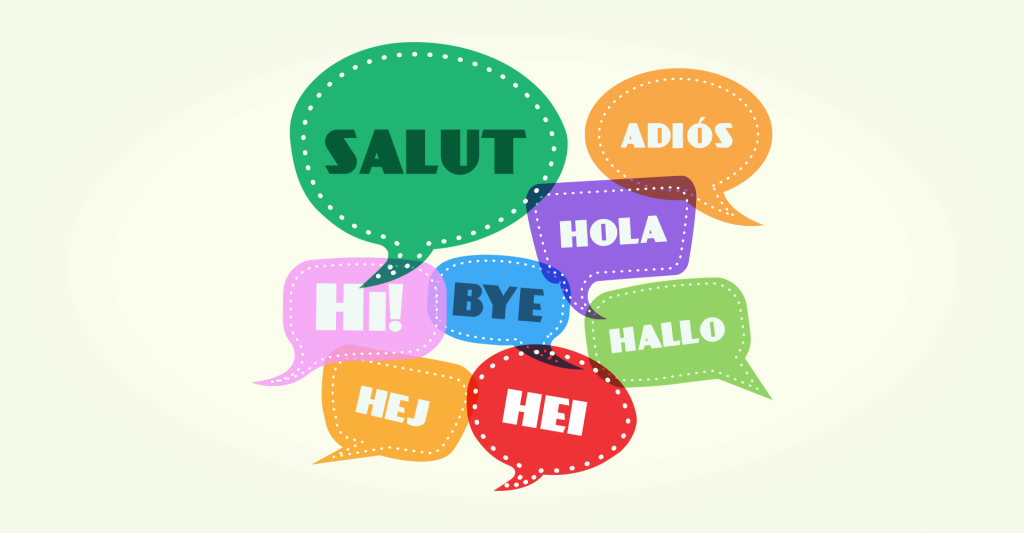 Consider this question hypothetically posed by a US based MNC to its Indian customers –
Would you take a camping trip to the woods this summer?

Indians, owing to the British English, typically use the word forest not woods. Therefore better way to pose the same question would be like this:

Would you take a camping trip to the forest this summer?

For someone who has English as a second language, it is hard to comprehend a double negative (two forms of negation used together).

“We don’t need no education” remember Pink Floyd’s cult song? That’s a double negative you must have heard. 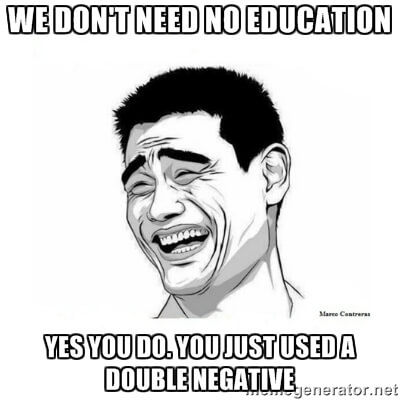 Using double negatives is inviting trouble, as a consequence all you will get is wrong representational data.

Have you nodded in an affirmation that you understood the jargon your colleagues used that you didn’t understand in the first place just to avoid embarrassment? I bet, yes.

You are quizzing the audience, therefore, remember the onus is on you to be understood. Avoid the use of jargons (e.g. BIOS instead of Basic Input Output System), slangs (e.g. LMK short for Let Me Know, or BAE slang for Baby & not meaning Before Anyone Else). Wherever possible define terms you don’t expect respondents to comprehend.

A Microsoft study unveils that the average human attention time is now just 8 seconds; a goldfish is a notch ahead with 9 seconds.

Moreover, most respondents are in a hurry to fill surveys. Value their time and effort, design surveys using clear, concise and unambiguous language.

And remember that it takes an effort to be simplistic in your communication, simplification is a complicated task.

When in doubt you can always test internally and seek feedback before running surveys. That said remember you always have to Keep it Simple. (Save in memory the widely used abbreviation, KISS- Keep it Simple Silly)

Needless to say, avoid the use of difficult words, instead use commonly used and simple synonyms.

Surveys are used to gather data and thus derive insights about a certain set of people, their choice, preferences or inclinations. To get an unbiased, natural response from respondents avoid setting bias in questions.

Take a look at the below example: The question is undoubtedly biased towards Apple and undermines Samsung.

Survey questions should ideally be phrased not to influence respondents.

Here is a leading question (suggestive question that hints to incite a particular response) that subtly sets bias at subliminal level:

The first sentence clearly sets a bias towards waiters being good at waiting for customers. To which a respondent may or may not agree.

At WebEngage, we have often seen a causal relationship between response rates and direct, simple, unambiguous survey questionnaires. In some cases, a little bit of tweaking in framing the questions spiked response rates by 25%. Having said that, it is a process of learning from your mistakes, of reiteration and of making use of what is common but often sidelined, common sense.

If you have anything to share with regards to your experiences, please do, use the comments section below.

5 Amazing Survey And Feedback Questions For Your Online Users 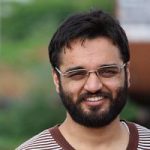 Shafique is a Content Strategist at WebEngage. He keeps abreast of SaaS industry, startup ecosystem and writes about digital marketing, on-site engagement and more. He is a marketing graduate from IMT Nagpur.

Liked our article? Give us your feedback by rating it.
Total Rating : 2 , Average Rating : 5
Related Articles

Table Of Contents: 1. Approximately 50% of people like to buy gifts online 2. Flowers and chocolates...

A quick analogy Let’s understand WebHook with an example. Imagine that someone pressed the tim...

We’ve all written some amazing content in the hope that people will love it, talk about it, an... 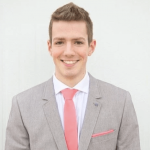