In-app messaging has gradually become the favorite of marketers because

But the biggest advantage in-app message avails is that, through it, you send your message to an already engaged audience. So it sets the highest possibility for your message to get attention from your readers.

However, the biggest downside of in-app messaging in comparison to push and email is that it cannot be employed for acquisition or even pull inactive users. It does what it does only when the user has decided on using the app. 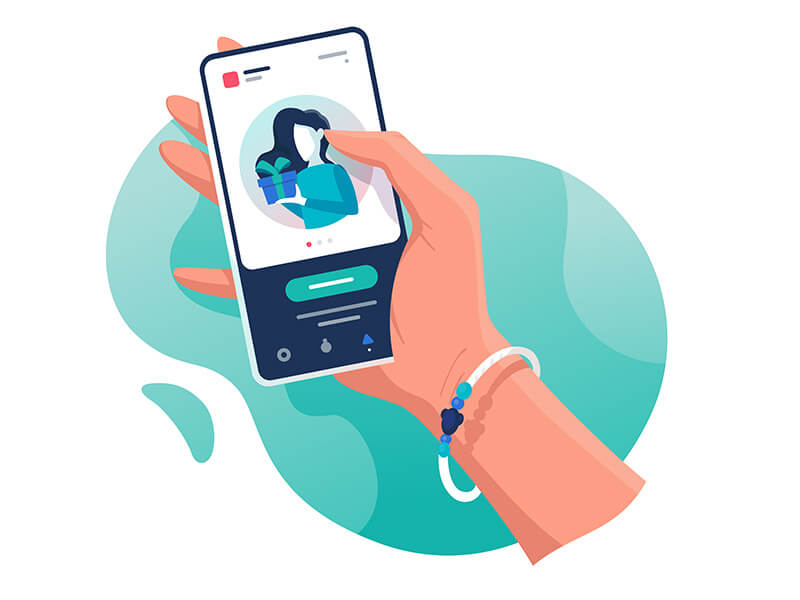 Users Spend 90% Of Their Time On Mobile Devices 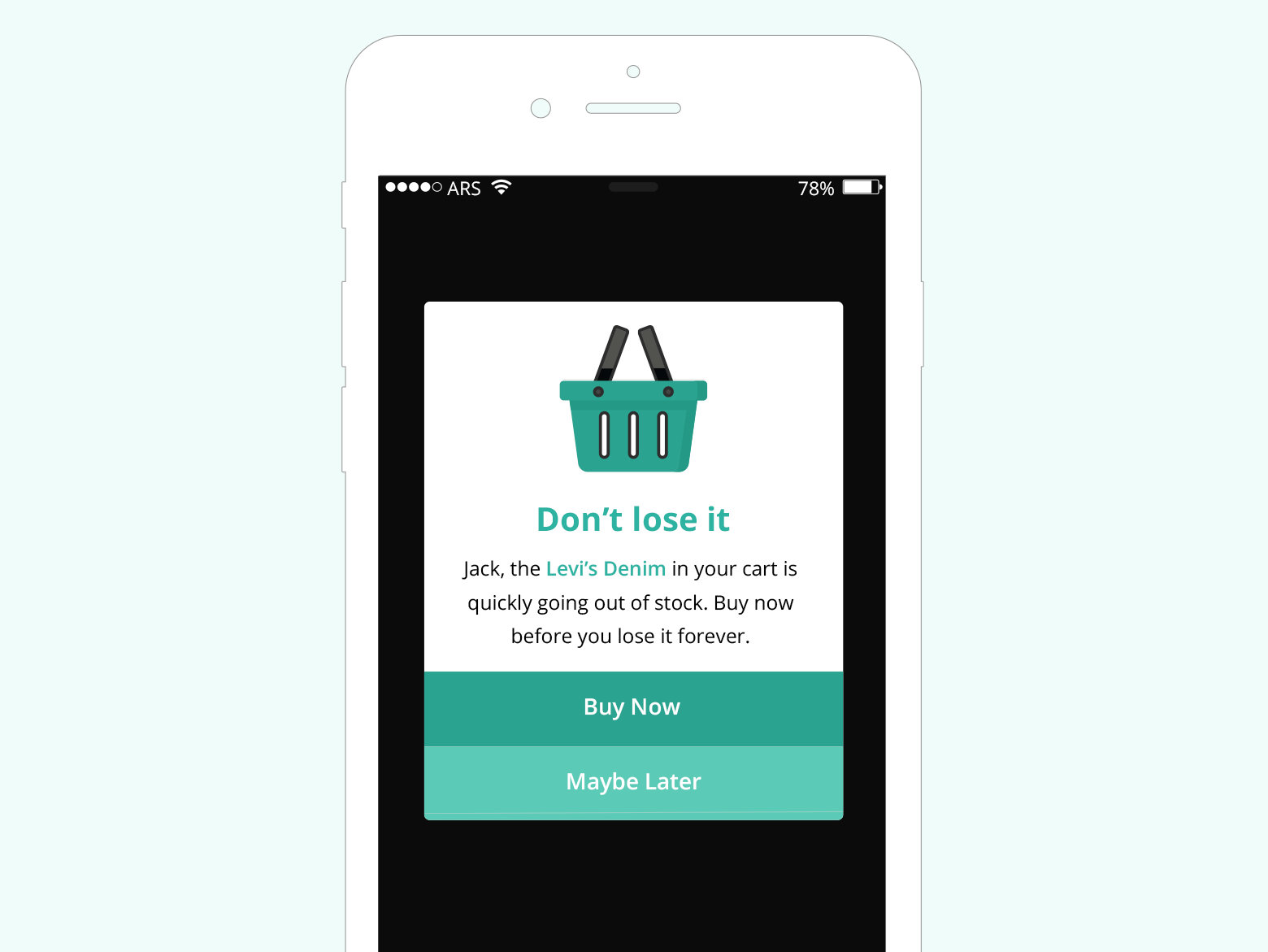 So far, email newsletters and retargeting campaigns were the only mediums to engage and convert the cart abandoners. The in-app message could be another potential alternative to persuade shoppers to finish their purchase.

Now, there could be several use-cases around cart abandonments like

We used the third one for the current use-case.

We added ‘inactive for more than 5 seconds’ condition because we don’t want to abruptly pop a request if the user is doing something on the app.

Essentially, you need to push users to subscribe to our newsletter only when they have shown significant engagement with the app. You can calculate engagement of a user by any of the following metrics- time on the app, number of purchases, feature usage etc. The point is that better the engagement metric, higher the possibility that the user loves your app and wouldn’t mind knowing more through newsletters. We took time-on-app in this case to evaluate the engagement.

Now, you can also go one-level deeper and add more context to the message by figuring out the category which the user has shown most interest in. In this use-case, we are showing the above message only to those users who have accessed ‘women’s category for greater than five times’ thereby making it more targeted and increasing the possibility of signup.

When to show– The user completes the checkout

Who to show– All iOS users 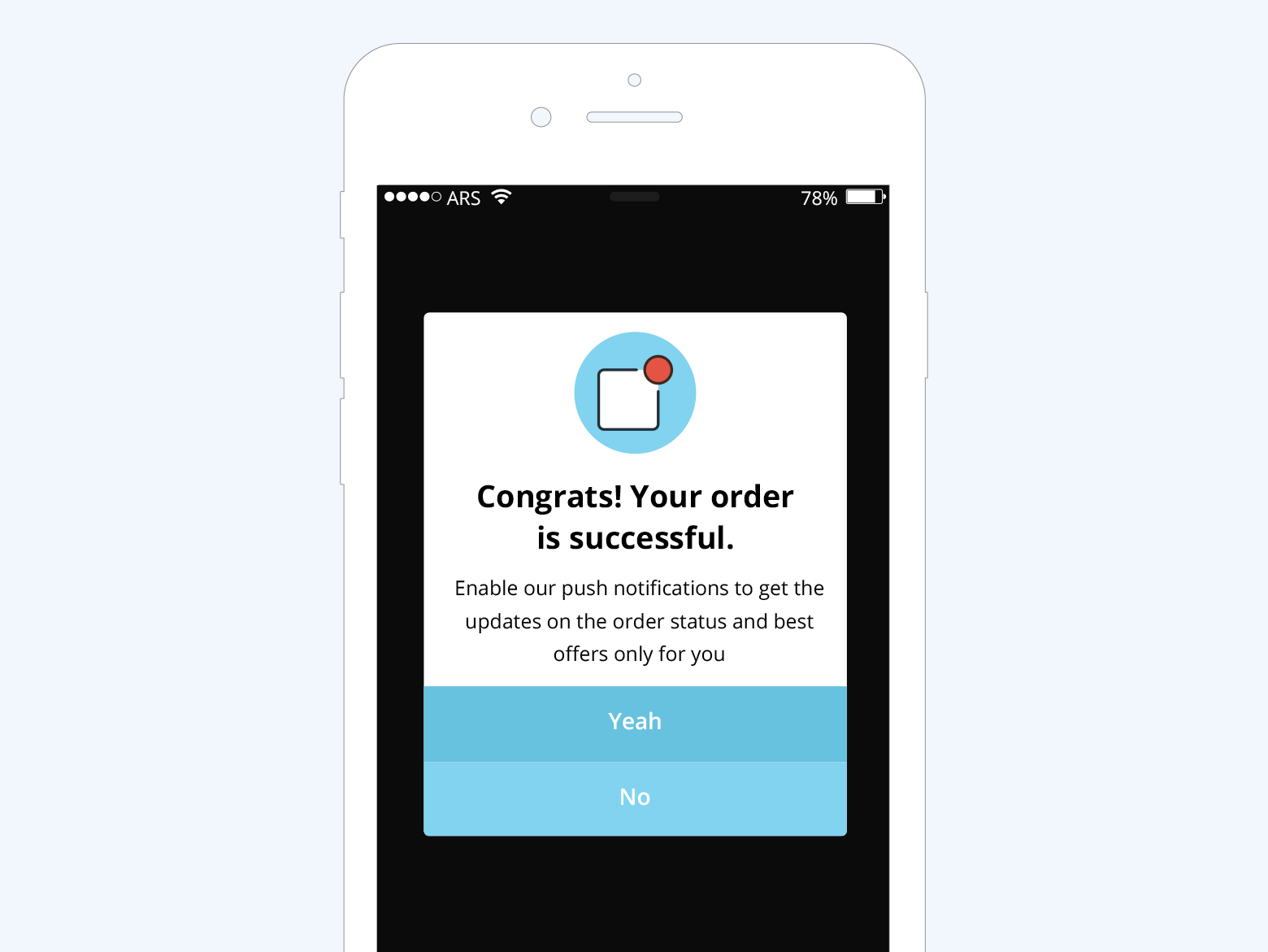 Push notification is intrinsic to the mobile marketing of any e-commerce business. In fact, in the absence of e-mail address, this is the only medium to pull back inactive users on the app, who are 60% likely to never return to it a day after install.

Why this use-case only for iOS users?

In Android, a user is automatically registered for push messages during app install, however, on iOS, the app has to explicitly seek your permission to send you push messages. The app takes permission through an iOS permission screen which app owner gets the opportunity to launch only once. 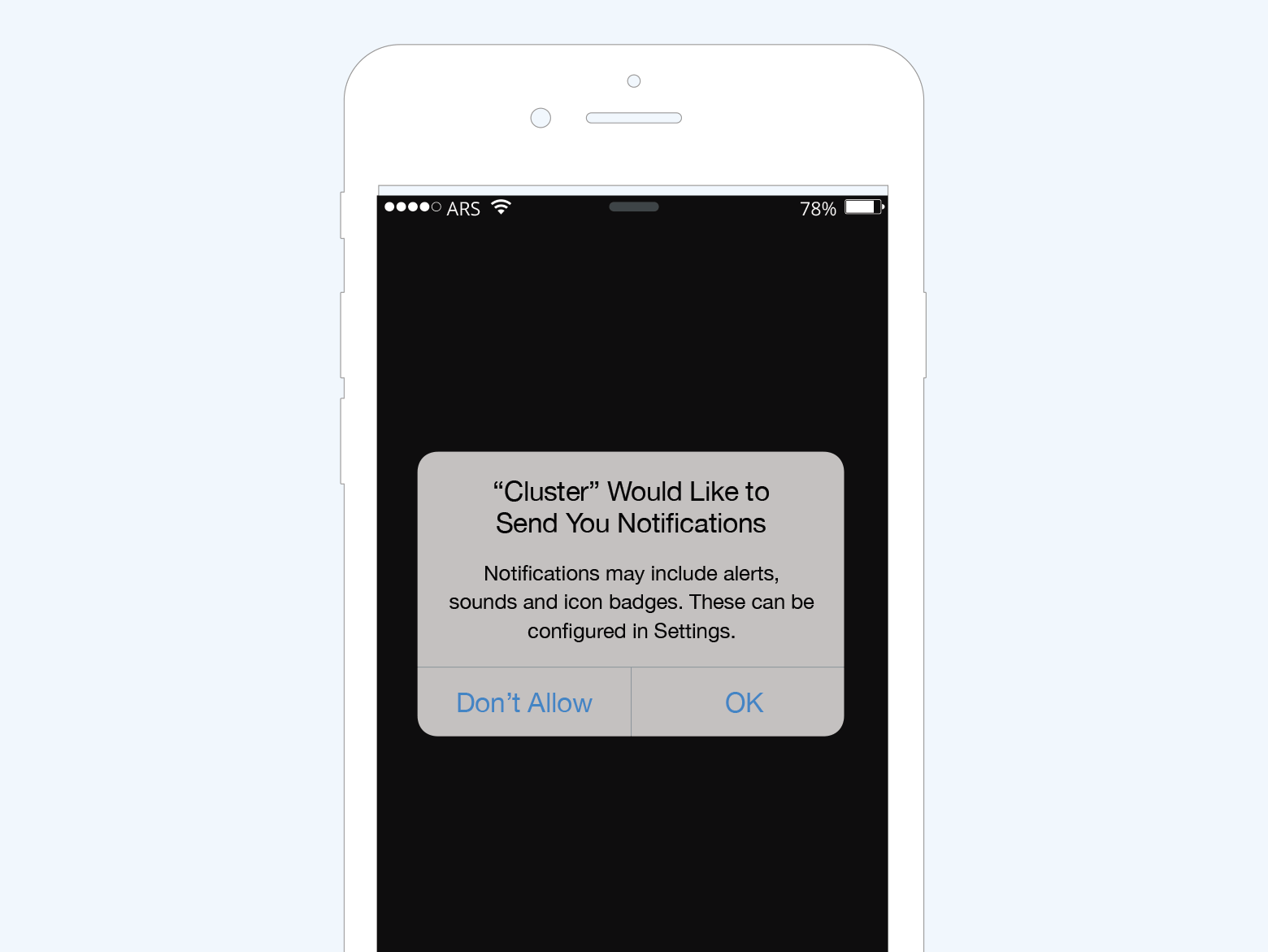 If the user denies you the permission, the only way you can have his approval is if personally changes his phone settings, the probability of which is as high as your optimism. So, essentially what you got inherently covered in Android is another big fight in iOS.

Saying that, before you think of seeking user’s permission to send him ‘push’, you have to be assured that he loves your app, which can be gauged from any engagement metric. (we took session count as the metric here) Further, you also require giving a solid reason as to why the user should subscribe to your push notifications. The above use case is targeted only to those users who have completed the checkout on their iOS device. On completing checkout we are encouraging them to receive push notifications to get the update on his order.

If the price of the product that the user is interested in has reduced, then it seems quite logical why would you want to notify her about the same. But so far, it has been one of the most difficult problems to crack both in online and offline space but now you have an awesome capability to automate this.

However, the in-app message in the above use-case would work only if the user is engaged. If the user is inactive for x days post the price has been upgraded then naturally in-app message is not going to work. We would have to employ mobile push notification to nudge user towards conversion.

When to show- When the user clicks on ‘Checkout’ button 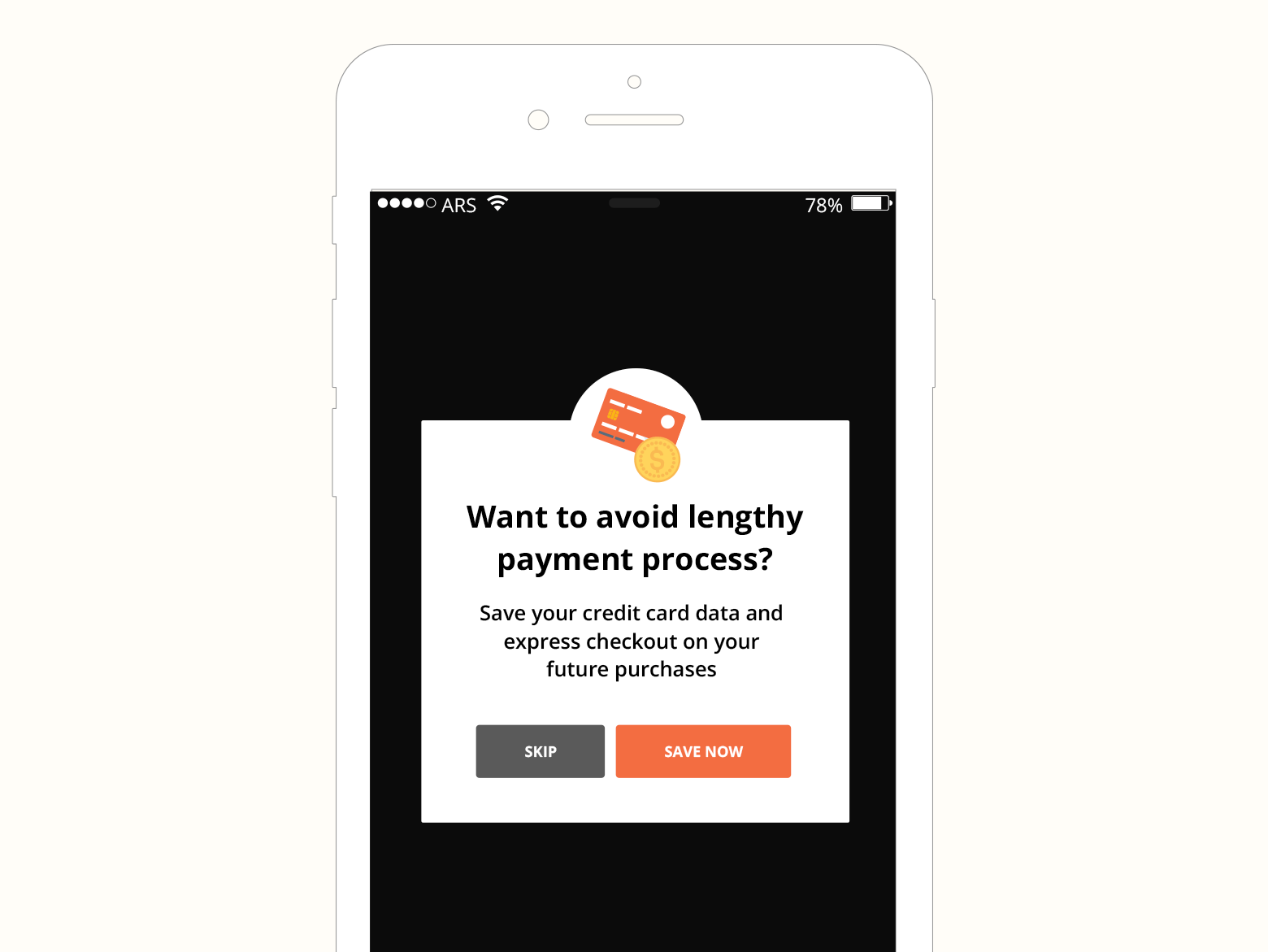 For express checkout, a user needs to save his credit card details in the system. This would let him escape the lengthy payment process. In the current use case, we are encouraging users to add their CC details so as to enable ‘Express Checkout for subsequent purchases.

Naturally, we are going to show the above message only to those users who have transacted via credit card before. We have created the segment accordingly. 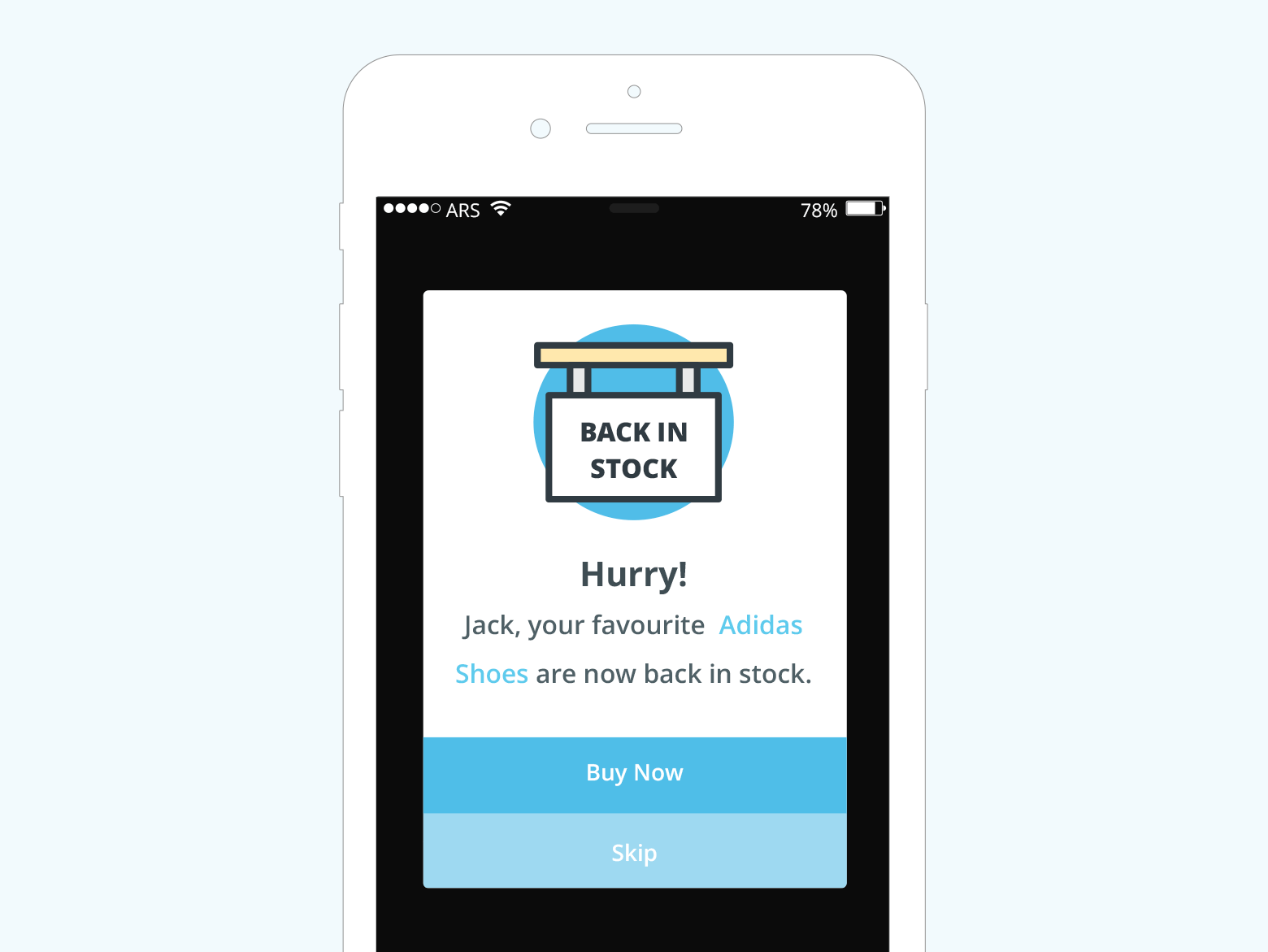 Oftentimes, a product in demand is out of stock and the user chooses to get notified through a widget if the product is restocked in future. An in-app message could be employed to convey users in the event of such occurrence.

When to show– The user has launched the app 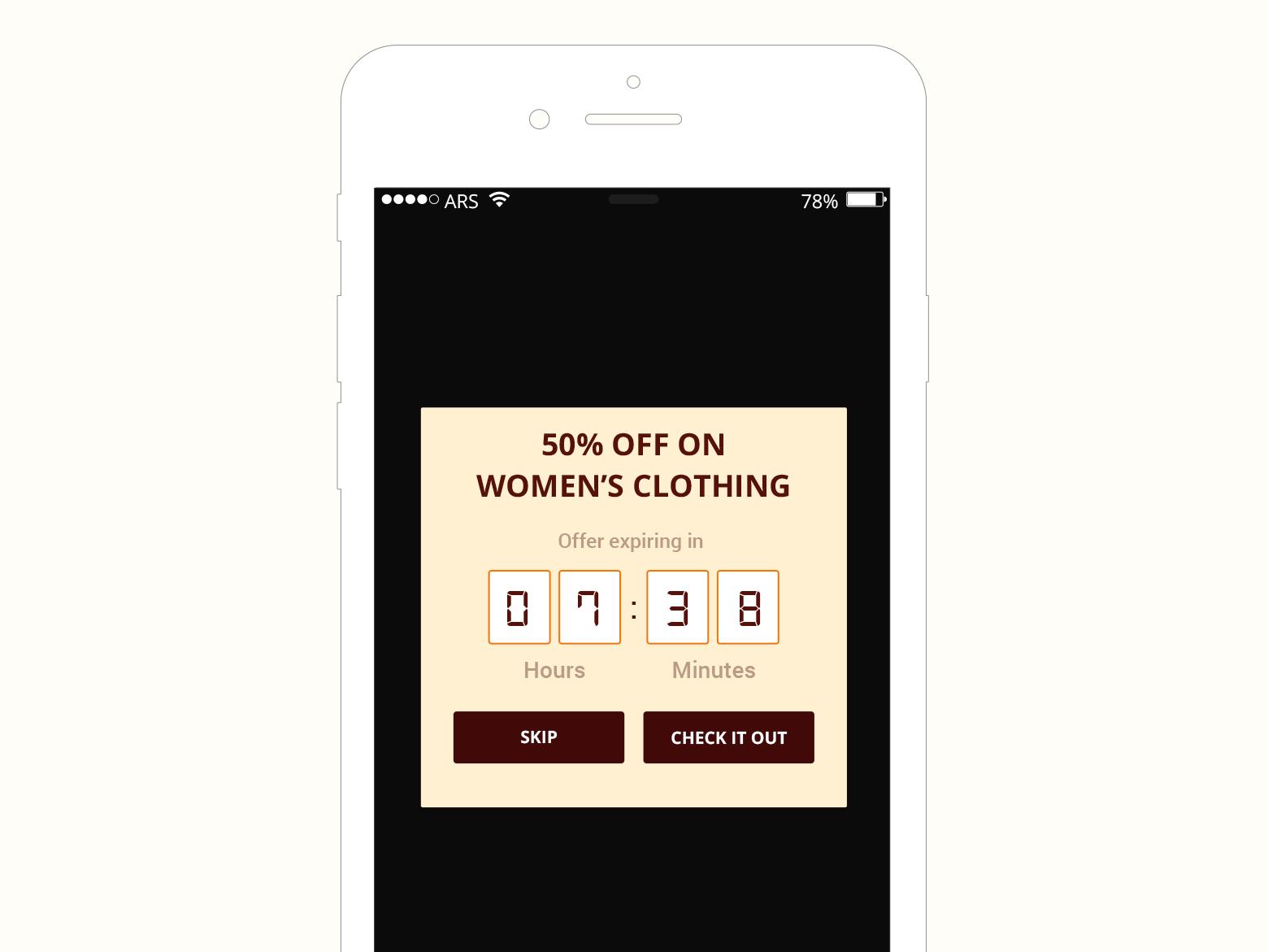 There is a day-specific offer running in a particular category, like Women’s in this case. So while creating the segment, we take into account all the female plus the users (who could be male) who have purchased a women’s product.

The above in-app message should also be coupled with an email and depending on the value of the offer, you can also contemplate sending a push and text.

When to show– The user has launched the app

Who to show– All users whose delivery of the immediate last purchase has been recorded + the user has not been fired this in-app message before, for the purchased product

Marketing automation gives an incredible capability to ask for feedback at the precise moment when it should be asked. In the above example, we are asking for feedback on shipping experience after the delivery. Similarly, there can other important use-cases too around seeking feedback. For instance, we can also automate asking feedback about checkout experience post checkout, about the new feature on the app once the user actually uses it or about new upgrade.

Whom to show- All users whose app version is not V 2.0(say App 2.0 is the latest version)

When to show- The user clicked on ‘Add to Cart’ button

Who to show- All users

Providing maximum value to one customer and increase his cart value is better than scouting for 10 new customers. On desktop site, due to its relatively larger real estate, it is possible to show customized product recommendations on the visible screen. However, on mobile, this thing largely misses out which could be compensated with an in-app message with a custom product recommendation.

Marketers should exercise discretion in using this so that it doesn’t earn the reputation of bad-popups.

Finally, like I said, exercise maximum discretion to ensure that your in-app message seems part of the flow and doesn’t come across as an intrusive popup.

For e-commerce stores, messaging mediums like in-app and push notifications hold enormous significance, as they are keen on engaging with their user-base more on mobile than desktop.

Check out WebEngage’s dashboard if you wish to see the live demonstration of the use-cases stated above.

Liked our article? Give us your feedback by rating it.
Total Rating : 3 , Average Rating : 5
Related Articles

B2B companies are surrounded by fierce competition that is growing by the day. In times like these, ... 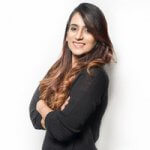 Did you know there are two specific engagement types your business should focus on? Brand engagement...