Beginner’s Guide To Web Push Notifications & How It Works

What are Web Push Notifications?

In fact, the biggest exploiter of this channel, when it was in its infancy, is perhaps Facebook. There was quite a chaos among a significant number of Facebook users, evident in this thread, who were confused, some to the extent of frustration, about how on earth is Facebook able to blast them with notifications without having its app installed or even website open.

Web Push notifications were first introduced by Chrome in early 2015 in its 42 version. The version included “two new APIs that together allowed sites to push native notifications to their users even after the page is closed—provided the user has granted explicit permission.”

The update allowed websites to send notifications just like apps could. It was allegedly the most critical mobile feature that was missing from the web and thus upon release witnessed a tremendous adoption by web publishers.

2003- Blackberry OS launched push email. This saved executives and business class from constantly checking their email. Almost everyone believes that this is what that fueled Blackberry’s success.

June 2012- C2DM was replaced by GCM to overcome the limitations that C2DM had. This is important because the current delivery of push notifications is facilitated by GCM. It has been added with additional features in its new version as FCM.

Jan 2015- Firefox extended support to web push with the launch of their version 44. This was not applicable on mobile site.

Aug 2016- Firefox extended support to web push even on the mobile devices.

Step 2: FCM is the notification service by Google which lets you deliver message to the user’s device (both desktop and mobile). Google doesn’t charge you anything to use this service because, well, as we all know, Google is very generous.

Step 3: Now, FCM doesn’t directly flash the message on the user’s device. It first sends to the service worker. The service worker processes this information and displays notification to the user. (Service worker is a script which runs in the background of browser and does a bunch of things. Visit this Google tutorial to learn more about them)

That’s because web push relies on ‘service worker’ to operate. According to w3c consortium specs, service workers will only work on secure origins (https://) and therefore web push too only works on https domains. The HTTP websites, therefore, need to employ a third party service provider (like WebEngage) which does a little workaround.

What these service providers essentially do is that they create a subdomain of their own website, like yoursite.webengagepush.com, which is HTTPS and trigger notification to the user on client’s (yoursite) behalf. So in the case of HTTP websites, web push is not natively sent by yoursite.com rather by yoursite.webengagepush.com. For the same reason, the opt-in process for web push in an HTTP website is accomplished in two steps while in HTTPS it is doable in just one. We have documented this process in detail in our help center

Here are a couple of tutorials for getting started with web/browser push notifications:

1. Getting Started With Web Push Notifications 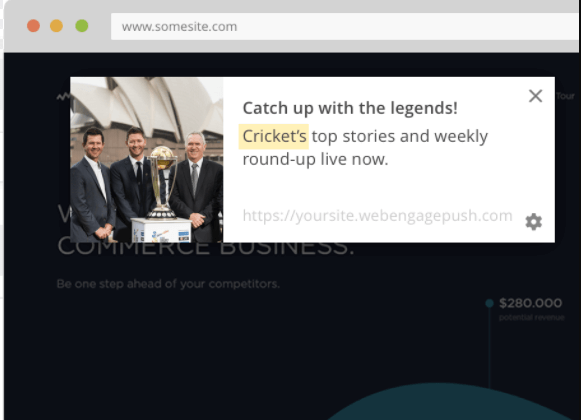 In Mac, a significant chunk of the web push real estate is occupied by compulsory Browser’s icon. Rest is the same. Also, like we discussed, Chrome in Mac doesn’t support banner image.

It is similar to how it looks in Windows except that ‘Close’ and ‘Setting’ buttons become visible only when you hover over it.

Since it is still in a nascent stage not all browsers and OS support it so far. Below is the latest table of browsers and OSs which support web push notifications.

2. It kills the need of having an app just to send notifications

Since, most businesses especially blogs, weather, e-commerce rely extensively on notifications for engagement, the introduction of web push mitigates the need of having an app. Further, there are three major downsides to launching your native app:

Web push thus makes launching an app just for push messaging a bad proposition for any business. It particularly addresses the pain of those businesses that have low transaction frequency (like insurance, loans etc), basically the ones which don’t necessarily need a mobile app at all.

Web push doesn’t risk ending up in the spam folder. Neither it can be blocked by ad blockers. It shows right up on your browser even when the website is shut. In mobile, it shows up in the notification tray, just as app push notification, even when the browser is not running.

4. Like email, it can be targeted on one-to-one basis

Digiday, in 2016, published a story making the case for web push as an alternative to Facebook- which is plagued by its ever-shifting-algorithm.

Quoting Anthony Sessa, VP Product at Mic, from the article “It’s (browser push) our feed. We get to control that feed and it’s not a black box like the Facebook algorithm. We can drive the conversation the way we want at the time we want.” Marketers obviously wish to completely control the conversation something which web push permits. Just like email, it can also be targeted to the exact user.

Like already stated, to be able to send push messages to the user’s browser, web-app is required to take explicit permission from the user which is taken via a dialog box like the one pasted below. 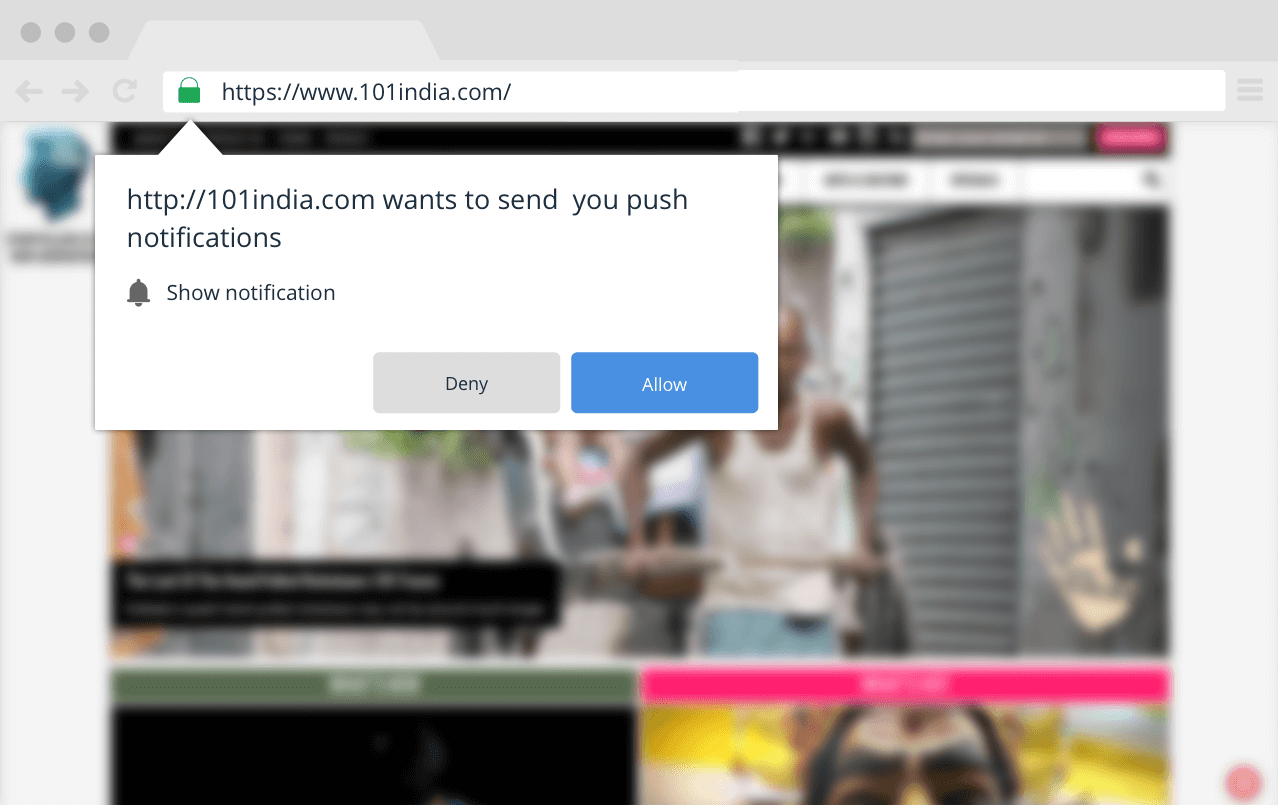 There are three ways a user can engage with this prompt:

Granted– When the user clicks on ‘Allow’

Denied– When the user clicks on ‘Block’ 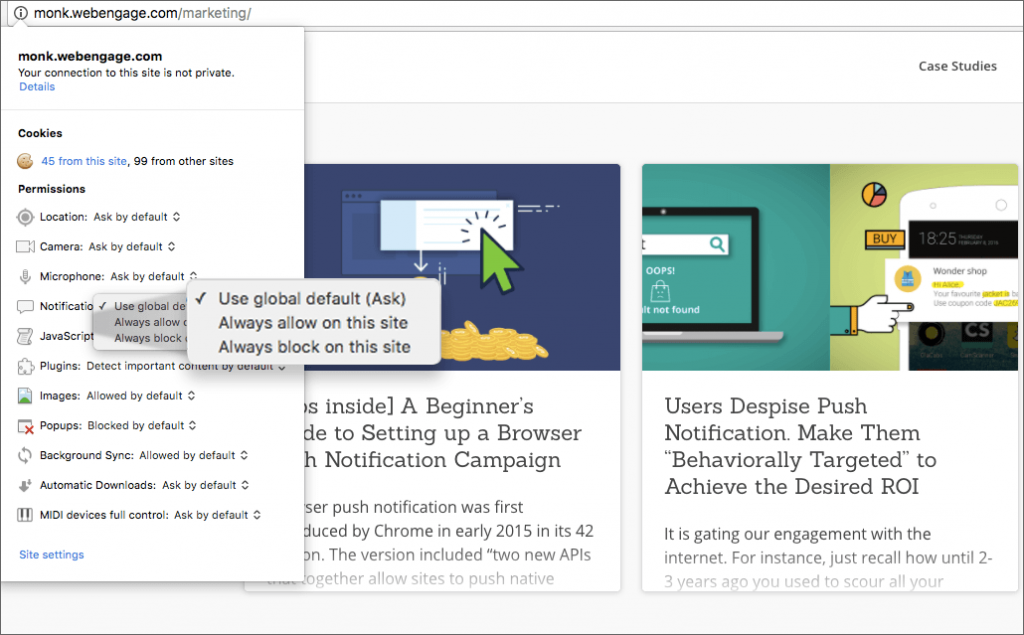 However, once the user denies, the browser doesn’t allow you to invoke the opt-in again. It’s entirely up to the user to reverse his decision which he can do by manually navigating a complex UI and change the site settings.

Following are the two ways in which we can do that.

1. Introduce a popup to nudge for permission 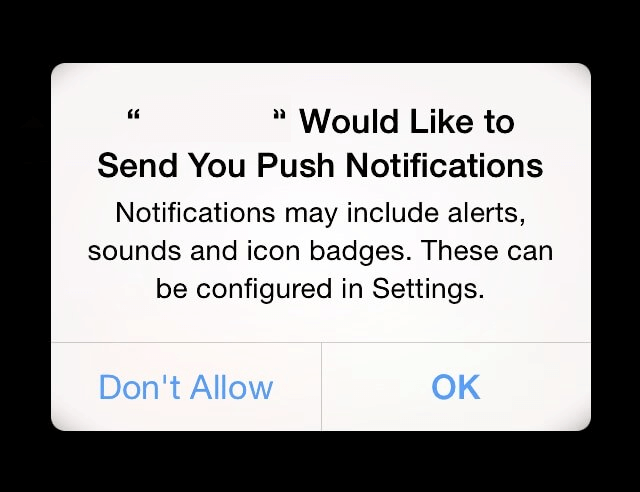 Now, to reduce the possibility of ‘don’t allow’ iOS developers camouflage the system opt-in with a pre-permission dialog box. 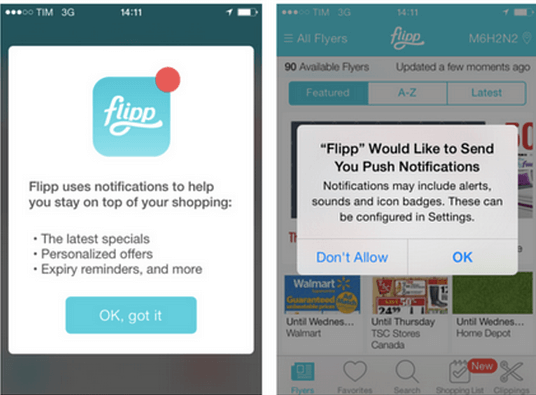 We are going to adopt the same trick for web push notifications too. Instead of directly launching the system permission dialog box, we are going to take the consent of the user via a notification that would nudge them to opt in the next step.

2. Trigger system permission dialog box by a click on a CTA button or widget

Another safe way of taking permission is to place a CTA button on your website which triggers permission dialog box upon click. This is naturally a fail-proof method because it is entirely driven by the user’s actions. However, the subscription is obviously going to be low because the nudge is subtle and not on the face, like the previous case. Pop a notification, if the user who has already subscribed to your notification, clicks on the button again.

The above two tricks that we learned is possible only for https website because as discussed non-SSL secured websites cannot trigger web push in the first place. These websites have to follow a two-step opt-in process. Let me illustrate an example of prettysecrets.com.

First, the service provider pops a custom notification like the one below. 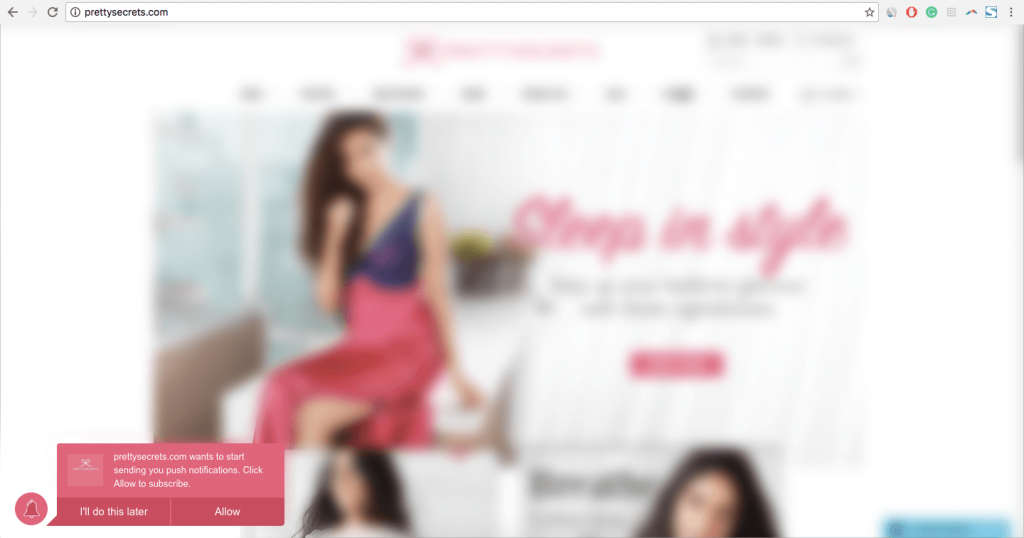 If the user chooses anything other than ‘allow’, then it is at the publisher’s discretion to pop the notification whenever he wishes. If the user, on the other hand, chooses ‘allow’ then the service provider (WebEngage) is going to open an opt-in window(prettysecrets.webengagepush.com) which in turn is going to pop the browser prompt.

This means that if the user opts in then notifications would be sent to him from the service provider managed domain (prettysecrets.webengagepush.com) rather natively from the client’s domain like it was in the previous cases. 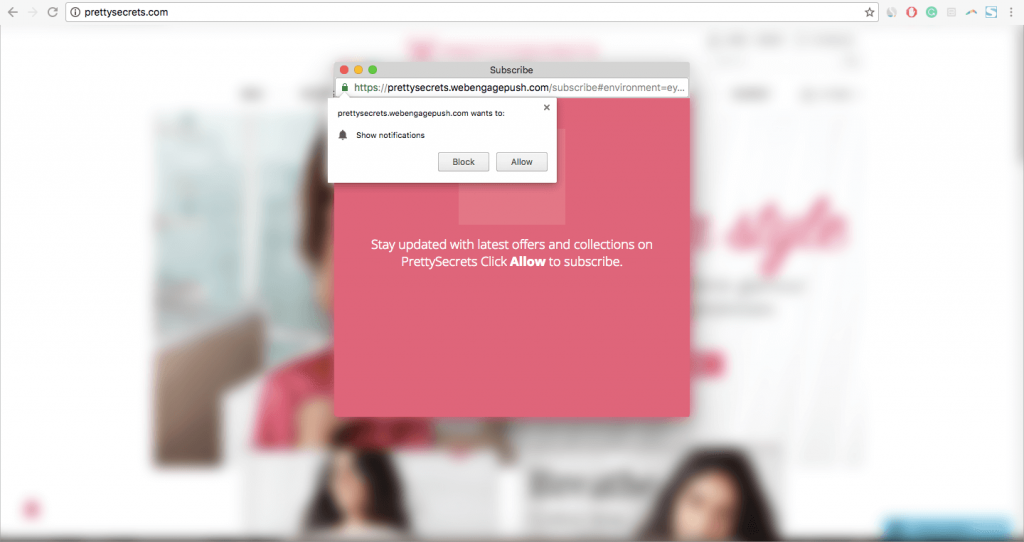 Use cases of Web Push across industries

Having said that, browser/web push too has got numerous use-cases across industries and it warrants a whole new post to talk about it. In this post we are just going to highlight some of the use-cases that businesses can quickly explore:

2. Send a welcome message as soon as the user accepts notification request. 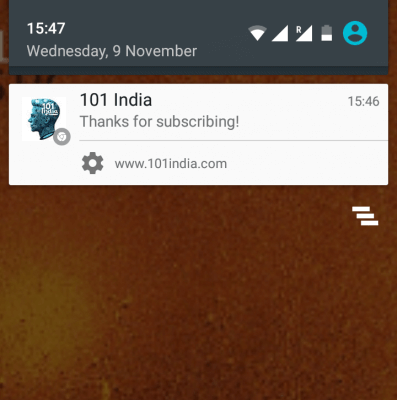 Finally, it should be noted that web push notification is still in its nascent stage and has several limitations, some of which I have listed below:

That’s all. I hope this article satisfactorily answers the question that you had pertaining to Web / browser push. If it doesn’t, please leave your questions in the comment below and we shall follow up.

Delight your customers and increase conversions for your business.

Show Me How
Tags

Liked our article? Give us your feedback by rating it.
Total Rating : 50 , Average Rating : 3.9
Related Articles

Introducing Conversion Tracking: To Know Which Half of Your Marketing is "Wasted"

“Half the money I spend on advertising is wasted; the trouble is, I don’t know which hal...

This is a UI/UX update to an already existing feature in WebEngage related to configuring the variou... 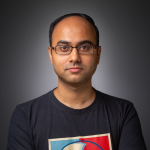 We are pleased to announce the introduction a new version of WebEngage integration code (Version 3.0...